Sad news. An international contest of chamber music performers named after Zara Dolukhanova ‘Amber Nightingale’ is already 25 years old. This competition is famous for a splendid organisation and hospitality, and long time ago it has become a brand identity of Kaliningrad (Russia). Next year it’s going to be Zara Dolukhanova’s 100th birthday anniversary, but today the organiser and the mastermind of the competition Valeriy Aliev announced a probable shutdown of the ‘Amber Nightingale’ due to financial problems.
A lot of young singers from across the world gathered together in Kaliningrad region. The requirements for the competition were demanding: a huge chamber music repertoir, including two vocal cycles – that’s a giant work for singers, pianists, jury after all! Even during preparations for the contest of such a great rate singers enhance their vocal, musical and educational level. Could it be true that nobody will help this amazing contest be continued? 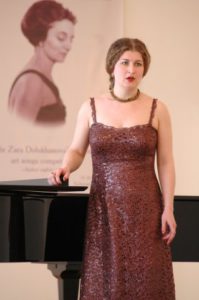