Due to the World Cup we have forgotten an anniversary of count Nikolai Sheremetev’s birth – a person, by all means incredibly significant for the establishment of the Russian theatre. “A friend of muses and peaceful interests” – and with his name is inseparably connected a name of a splendid soprano singer of the 18th century, who mesmerised even the Empress Catherine the Great: Praskovia Zhemchugova. On the 31st of July (20th of July in the Julian calendar) 250 years mark since her birthday. A beautiful love story of the count and his bondmaid with a nearly happy ending – a joyful marriage was snapped by an early death of the singer. The count was faithful to his wife’s memory and immortalised her name with unique architectural monuments, one of which is to this day a delight for the eye of the Moscow citizens, now being the Scientific Research Institute n.a. Sklifosovsky. 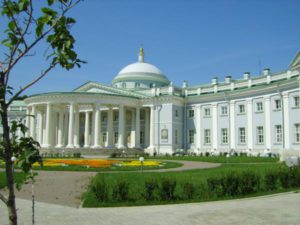