Rimsky-Korsakov has left us an enormous musical heritage and has founded a composers school in Saint Petersburg. Over two hundred of his students became famous composers, among them were Glazunov, Grechaninov, Prokofiev, Stravinsky… The author of 15 operas, magnificent both from the musical and dramaturgical point of view. I’d love to perform a part in each of those, but sadly, not all of them include a part for mezzo-soprano. However, there is an indisputable favorite of mine among those: The Tsar’s Bride, which has been being performed across the globe for over 120 years. I’ve been introduced to Lyubasha’s part long before being admitted into the conservatory; and have fallen in love for life with the image full of sorrow and dramatics, with dark music even during lyrical scenes. During my conservatory studies, my professors and I have broken down and analyzed this whole part. Thus, Lyubasha became my diploma work.

Friends, I promise you a new recording of Lyubasha’s aria very soon, but for now, have a look at this photo!

P.S. Speaking of which, the embroidery of the headwear (kokoshnik), is the result of my own work. Looks really nice, eh? 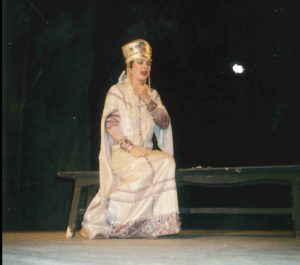